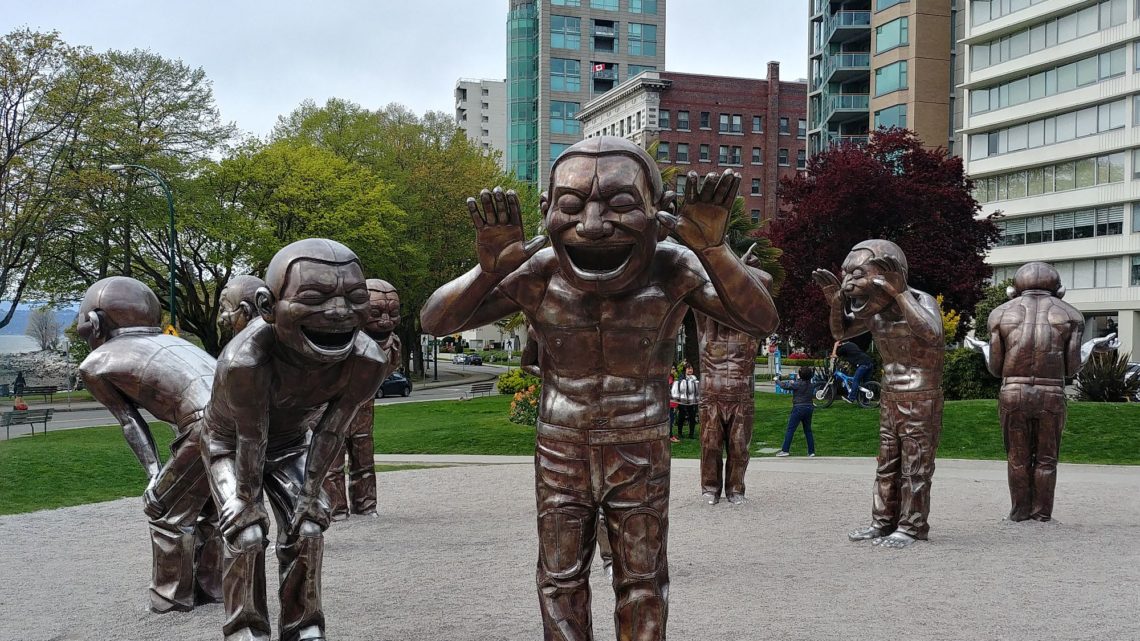 Even when you travel, sometimes, you have to take care of errands.

I started by going to the transit card customer services, because I was charged an extra 5 dollars and I wanted to know why. Seems that it is the airport charges I incurred when coming back from accompanying Solène there. I grumbled, but realized soon enough that had I known beforehand, I still would have gone, so no use in grumbling. And anyway, I got the content of her card transferred on mine at the same time, so one good thing done.

Do you know that Canadians wait for the bus in line? Instead of bunching up and pushing and shoving -hum, the bus in Paris…-, they line up and wait for the people to come down in an orderly fashion. (It doesn’t work that well all the time, of course, but it’s impressive.)

My card thus reloaded, I took the bus to the nearest (not that near) big supermarket for some grocery shopping. I started at Whole Food (the name sounds good, doesn’t it?) It sounds good because the food is actually a bit expensive. And fancy, like black pasta and pumpkin-kale-ochra chips (I’m making that up, but you see what I mean).

So I paid for my very small selection and crossed the street for Safeway, a bigger, more traditional choice. There I could buy a big bag of (regular) pasta for a correct price. Too bad they had a delicious looking deli because I bought more than I should have -though it did made me quite a few meals, so all’s good.

One of the easy comforts of travelling in cool weather is buying instant, powdered soup. It’s light and easy to carry, usually cheap, you pour hot water, stir, wait for it to get to a non-burning temperature, drink.

North-American don’t carry this kind of easy food. I mean, they have the exact same concept for hot cocoa -with water and not milk, the heresy!- and mug cake, you would think they would translate that to soup? But no, they have soup cartons and cans of condensed soup (think Campbells), but no instant soup. When you are shopping, bringing back on the bus 2 cans of condensed soup or two packs of instant, powder soup is quite a difference.

At least in Canada I can find a good choice of tea, instead of facing shelves and shelves of coffee and a blink-and-you’ve-passed-it tea assortment.

So back to the hostel with my shopping, a good lunch, and back out to fetch a parcel I was expecting -some things you can’t find easily in Europe, so you take advantage of that!

You will notice strange people laughing illustrating this article: walking along Second Beach (yes, nothing like a number to make a name feel special), I noticed this sculpture of people laughing and making faces. It’s supposed to bring laugh and joy to the watchers.

I’m also spending time preparing my return to France. I’m moving house, I’ll have to change my address on a fair number of accounts, and things like that. The dreaded search for a job. I’m also working on that.

I didn’t mention that I switched hostel; I’m in the sister hostel, a bit further from the main shopping street, a bit quieter, with a real kitchen. I’m still in a four-bed, female dorm, which I’m mostly sharing with a lady whose parrot is at the vet’s. Nothing like late-night discussion on religion, pet care and love, First Nation politics, and so on.

(I’m mashing together several experiences during that stay that happened later on.)

I had a very good night the night the dorm lock wouldn’t work for me and the staff, because since I couldn’t get back in as long as it wasn’t working, they gave me a private room. Apparently my dormmates didn’t have the problem and slept in the dorm.

My top bunkmate thought appropriate to make a phone call at 7am (in her bed) while everyone was still sleeping. Strangely enough, we were all up in the following half hour.

A fleeting bunkmate was a Kiwi on her first big trip -she is on a work-holiday visa for two years in Canada-, this is her first hostel ever… and she asked to be switched room. Was it because she would be with two Kiwi girls she met on the plane, or because parrot-lady and I were too strange for her? I wonder!

That said, discussing Filipino tourism and Catholicism with the Filipino cleaning man it its own experience too. That’s when you wish you weren’t that polite and knew how to get away. (…did you know that the lost Jewish tribe went to the Philippines and that’s why it’s paradise on Earth? Because I didn’t.)

The lift have been out of order too, so I discovered that the stairs are hiding behind the “Emergency Exit” door. Maybe a sign marked “Stairs” could have completed it?

And someone managed to break an egg on the stairs… and didn’t clean it up. Joy! Were they juggling eggs? Because if it was in a carton, the mess would have been more contained. And since you’re not supposed to have food in your dorm (there is more than enough storage in the kitchen, I love this kitchen, except when my milk gets stolen), why would you have eggs not in a carton with you?

I finally gave up and downloaded a canasta app on my phone. The rules are different from the one I have been using, but I’m having so much fun!