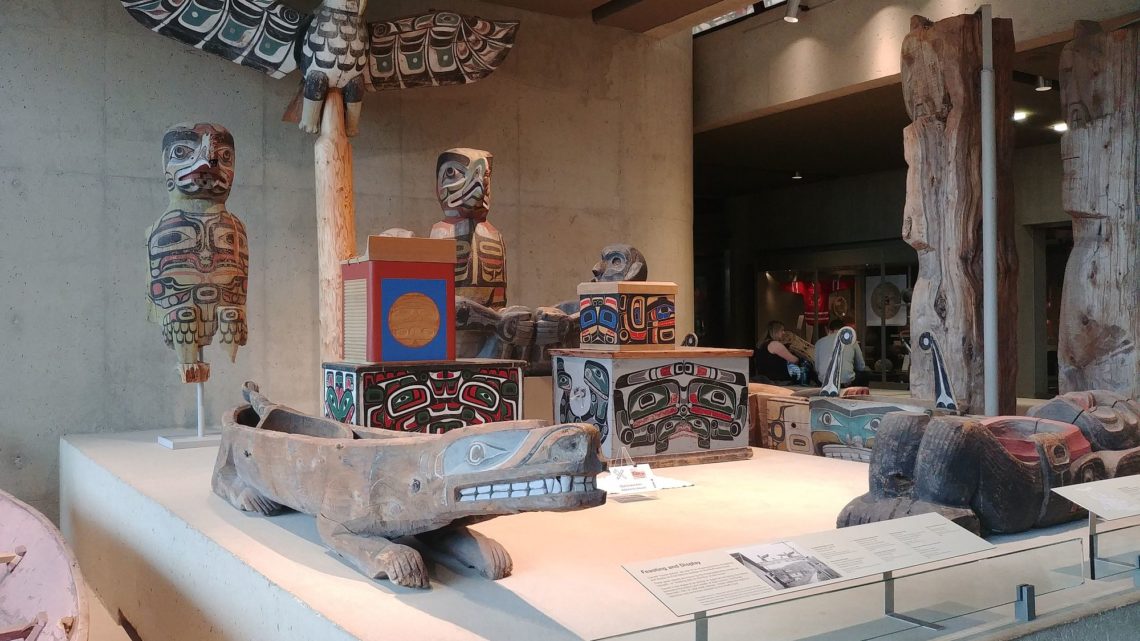 Museums are a classical occupation for a rainy day. A well-thought look at the weather forecast had allowed us to plan a visit to the Museum of Anthropology.

As it is the first museum mentioned in my guidebook, and is highly praised by it, we were quite surprised to find out that going there would take us a whole hour, of which the last fifteen minutes were occupied by a long walk under the rain, looking for our way. There is barely a sign indicating the direction until you arrive!

This museum features an impressive collection of Native People art, the most extensive that we have seen so far. Even though we are now familiar with the main items on display (totems, house poles, chests, baskets, weaving artefacts and so on), some exhibits left us in awe. I for one admired a feast dish at least two meters long, in the form of a two-headed sea creature, with a ladle as a tongue, and placed on wheels. 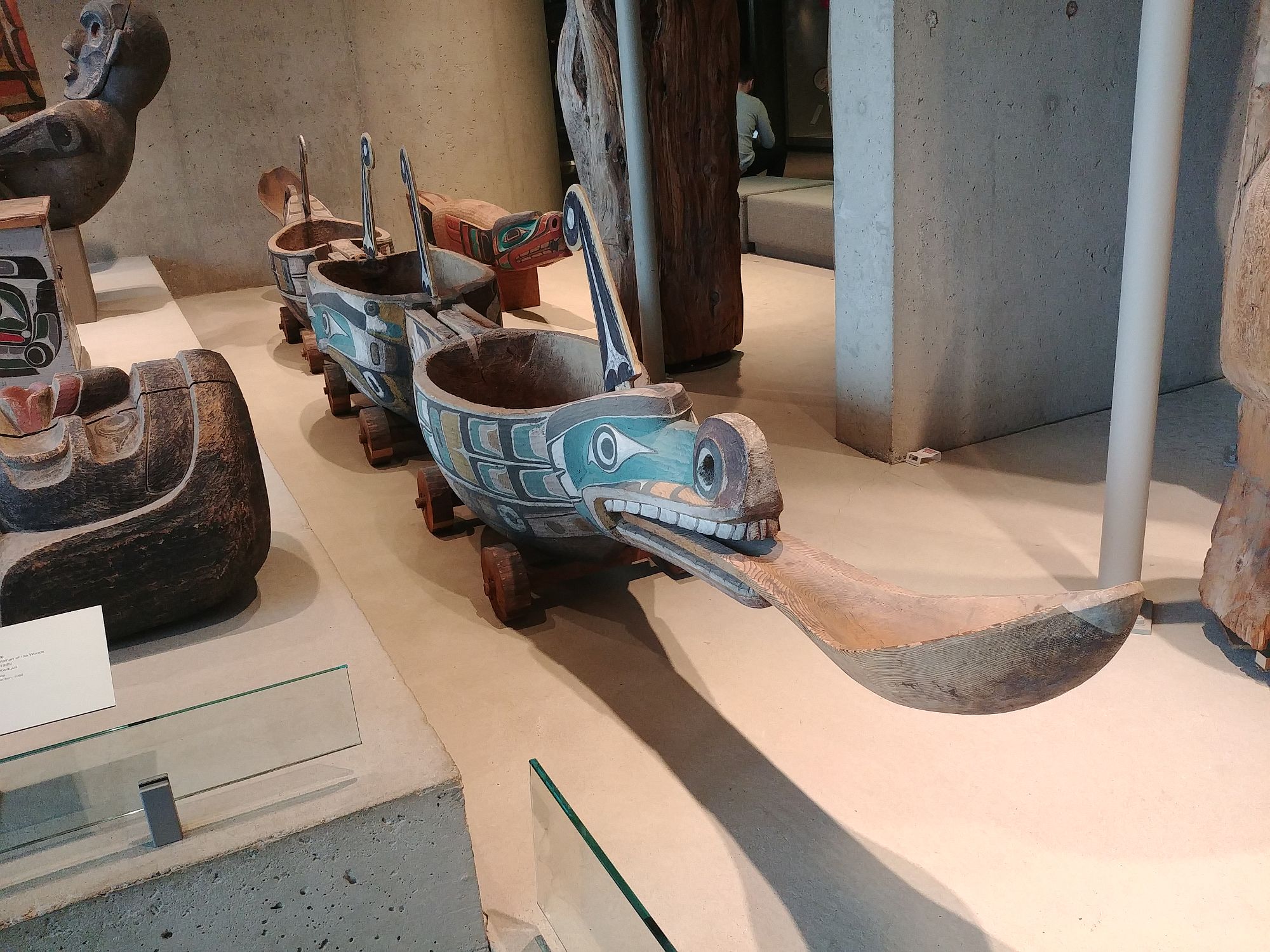 I (the other one) greatly enjoyed the bentwood boxes. These cedar chests are made from a single plank of cedar. Three grooves are carved at regular intervals, then the plank is placed into steam to allow the artist to bend it along the grooves into a square shape. The last joint is sawn or pegged shut, and a bottom and a lid are fitted. The sides are then carved and painted. You can see some ancient and modern examples in the picture featured at the head of this article. 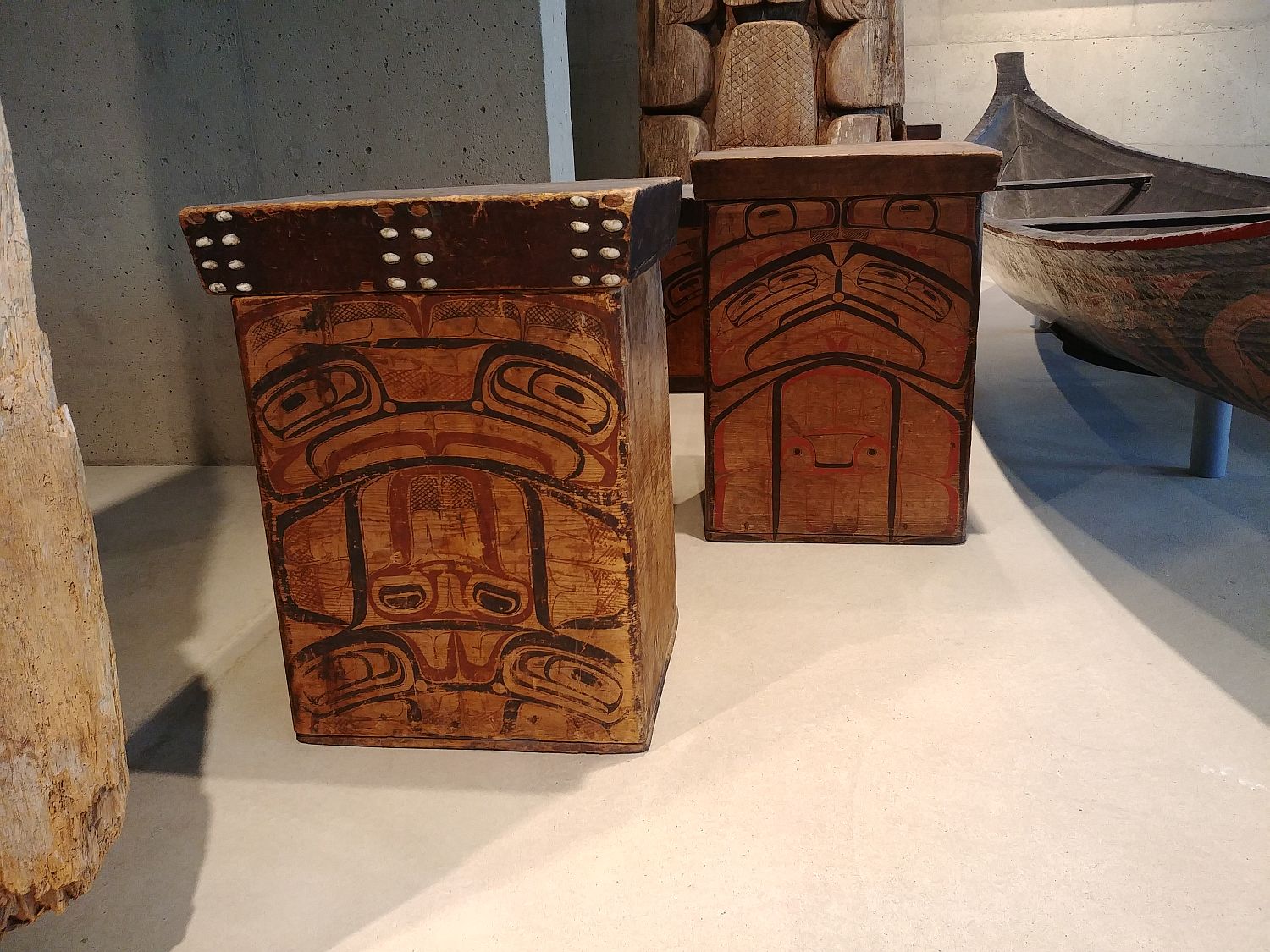 Joining a guided tour gave us additional insight concerning the art. We learnt to differentiate the carving styles of the three main nations displayed there : Salish (deeply carved and more realistic), Haida (stylised but also deeply carved) and Kwakwaka’wakw (very stylised and superficially carved). We also learnt more about the potlatch tradition.

We already knew it was a celebration that could take place in case of a wedding, a totem pole raising, or a funeral. We learned how the gigantic feast and the gift-giving had also a role of thanking the guests for witnessing the events and dances of the potlatch, contributing to a common memory.

In more details, potlatch are the place to hand down names (=titles), privileges (=the right to tell a story, to perform a particular dance, and the regalia, masks, artefacts associated with them), perform weddings, end a mourning period, and so on. This is when particular dances are performed, stories are told, and totem poles commemorating these events are raised. The wealth you show and give away cements your reputation and your rights to these privileges, and cements the event in your witnesses’ memories.

It is akin to having witnesses sign official papers in Western culture for a wedding or other official acts. And it has now been admitted in official court of law in Canada.

Potlatch was made illegal by the Canadian law for almost 70 years, which was responsible for the loss of several traditional skills (Salish weaving is an example). Many communities perseverated in the perpetuation of the tradition, coming up with impressive imaginative schemes to escape the punishments. 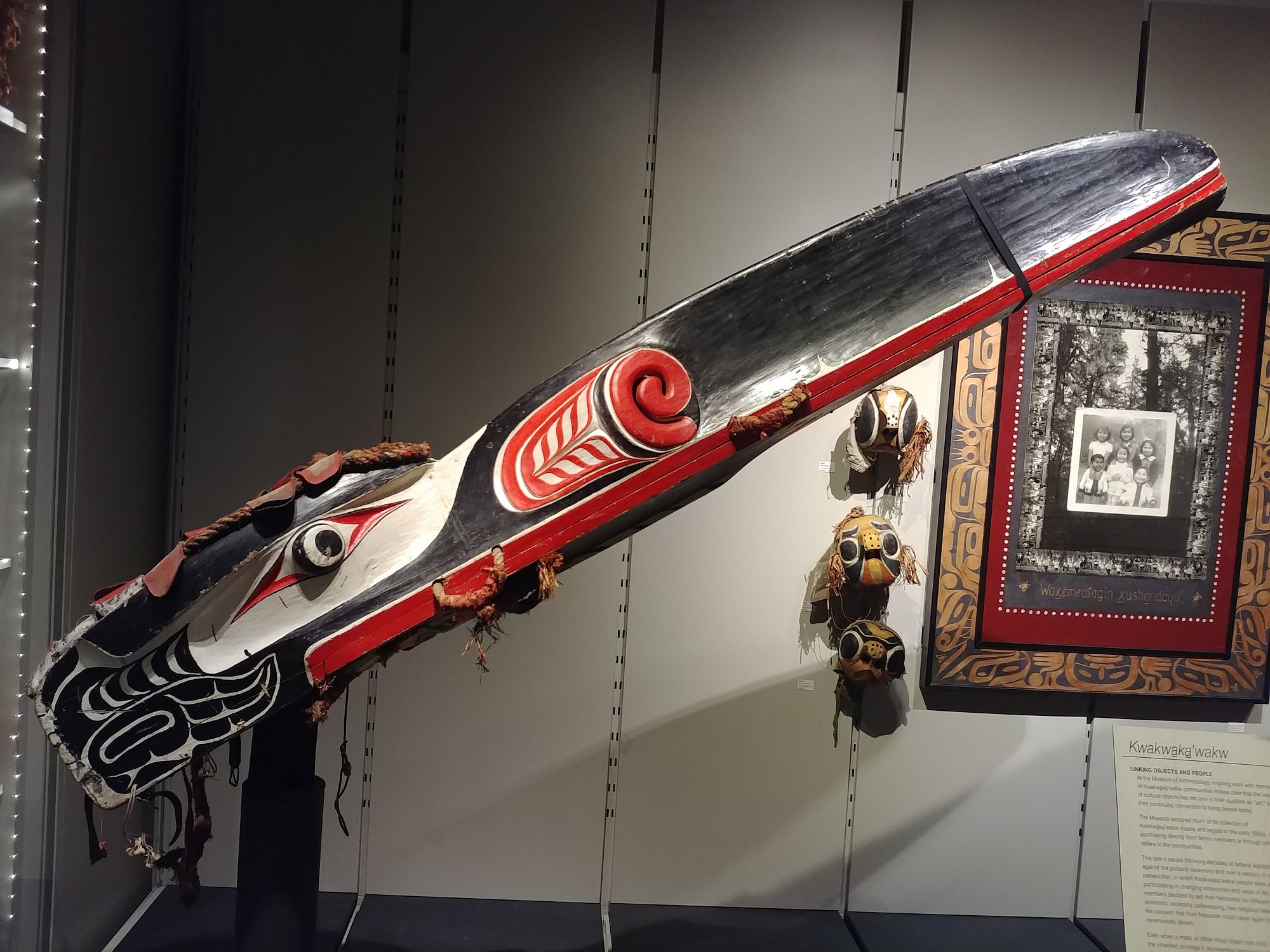 Museum of Anthropology – Raven mask (used for a potlatch dance)

Further, a massive sculpture tells us about one the myths of the birth of humanity. A long time ago, there was a massive flood, which drowned everything on earth, except trickster Raven, who could fly far above. He was left very lonely. When the water receded, he spotted a white dot on the sand. Coming near, he saw that it was a clam shell containing small human beings. With his trickster tongue, he then encouraged these tiny figures to crawl out and educated them to become the First Men. 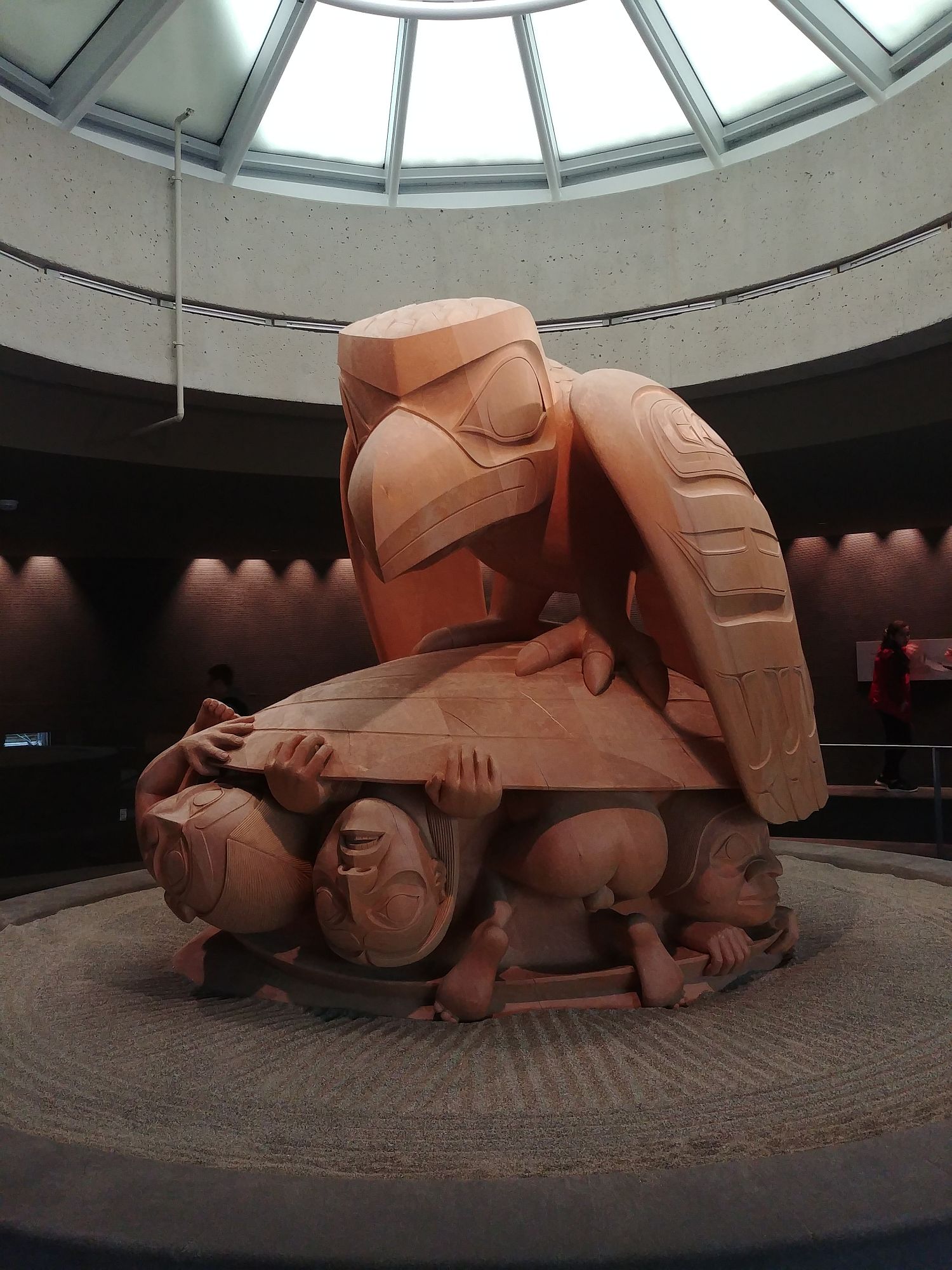 Museum of Anthropology – Raven and the First Men

The museum takes great care to include the descendants of the First Nations in the exhibit interpretations, and many pieces come with a personal testimony, which helps maintain our interest.

In addition to the massive pieces that are featured in the first gallery, the museum also possess an innumerable collection of smaller artefacts, not only from the local history but from all the world. These are displayed in a gigantic room, with crowded shelves and tons of drawers to open for the interested visitor. By the time we had finished with the First Nations culture, we didn’t have much energy left for the Indonesian, South American, Chinese, Japanese (etc) collections. We only gave a quick glance to the delicate ivory fans, the graceful puppets and other items.

The way back was very similar to our coming there, with as much trouble finding our way to the correct bus stop under pouring rain. We found it necessary to stop in a little sushi restaurant to elevate our mood, and the free hot tea helped a lot.